A local hospital was having issues keeping their operating rooms at an adequate temperature for doctors and patients. The source of the problem was water-scale deposits that had accumulated within the condenser tubes of one of the wing’s dedicated chillers. It had been operating without issue throughout the spring months, but once temperatures began to increase the 1,200-ton unit began struggling.

A team of service personnel was brought in to clean the tubes in order to prevent the issue from escalating to critical. The unit had to be shut down and the condenser was opened to mechanically brush inside of the tubes and remove the scale deposits.

Although successful at reducing its condition from near-critical, brushing did not remove all of the scale deposits from the chillers’ enhanced tubes. Those that remained would cause similar effects to that of arterial plaque and the tubes would be susceptible to further scale accumulation at an increased rate. At this point, the condenser water change in temperature (leaving water temperature – entering water temperature) had only achieved 4.5°F ∆T out of the OEM design of 10°F ∆T.

The remaining scale deposits were trapped in the enhancements of the condenser tubes. Safe, biodegradable RYDLYME descaler was circulated at a low concentration to remove the scale deposits quickly, easily, and completely. The RYDLYME cleaning was performed within 7 hours and the unit was brought back to life. The condenser was opened once more after cleaning for a final, validated inspection. Condenser water ∆T after RYDLYME was able to achieve OEM design specifications of 10°F ∆T. The cost of RYDLYME was recuperated in less than three weeks of operation as the total energy savings for the year was more than $75,000! 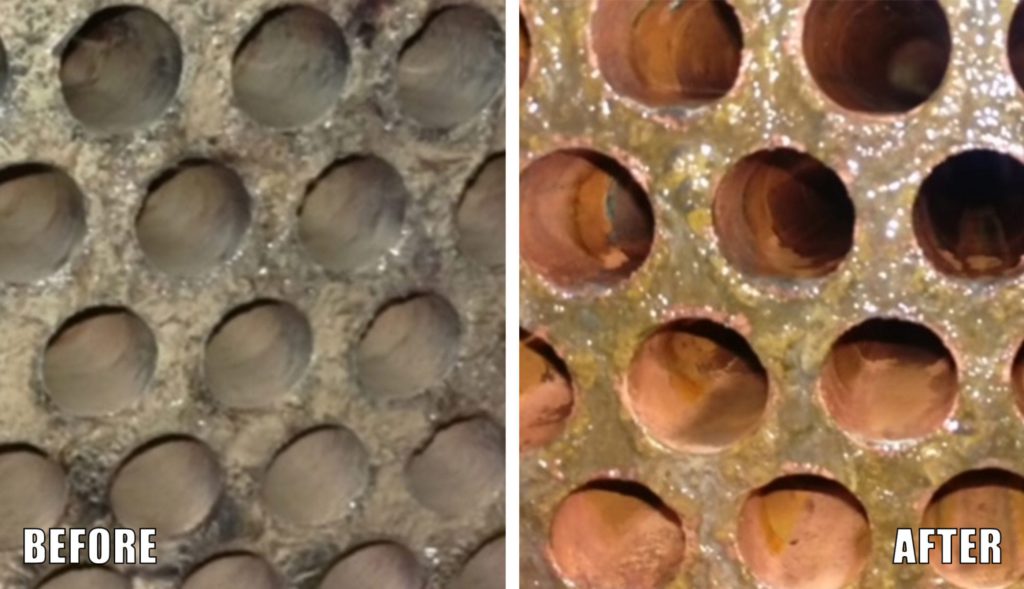