A Canadian wastewater treatment plant was having serious fouling issues within its digester line. Their flow rates were reduced to just 1.25 liters per second (LPS).

The system was evaluated and calculated to contain a maximum of 4,112 gallons of water. A sample of the scale deposit was obtained and provided to Apex Engineering Products Corporation for testing purposes. When static tested with a 100% solution of RYDLYME, the results were very positive (>95% dissolved) within less than 12 hours, and arrangements for cleaning proceeded.

Due to the severity of the scale accumulation and test results it was recommended that a 100% solution of RYDLYME be circulated for at least 8 hours. However, when cleaning began, just 1,650 gallons of RYDLYME surpassed the capacity of the digester line. This indicated that there was an average of 8mm of scale deposit throughout the length of the 1,400-foot digester line. Virtually a 60% reduction in volume! After 5 hours of circulation, the flow rate had quadrupled to 6 LPS! However, at this time, the cleaning was paused for visual inspection at a low point in the loop’s elevation. Much of the scale deposit remained, so additional samples were collected and sent to a third-party laboratory for analysis.

This second sample deposit was comprised heavily of iron. It was also found that because the circulation loop was not vented to the atmosphere, pressure had built up within the pipe and trapped air in the top section of the pipe diameter preventing the scale from being dissolved. The circulation loop was adjusted to incorporate a balancing tote and vent the solution to the atmosphere. Upon continuing the circulation, additional volume was realized and all 12 totes of RYDLYME were able to be added to the digester line. Achieving a system capacity of 3,960 or 96.3% of calculated physical volume. The circulation continued for a total of 90 hours until the pH recovered to nearly 5. When the final inspection occurred, there were leftover insoluble particles and grit which were also found in the balancing tote.

With a larger circulation pump and increased flow for the cleaning, it is likely much of the remaining insoluble material that was found in the low-elevation piping would have been flushed out to the balancing tote and removed from the system. The greatest aspect of the RYDLYME cleaning was the significant increase in water volume. Numerous other WWTP have utilized RYDLYME and found more quantitative success in financial savings from pump operation and amperage increased production from flow rate and volume gains. 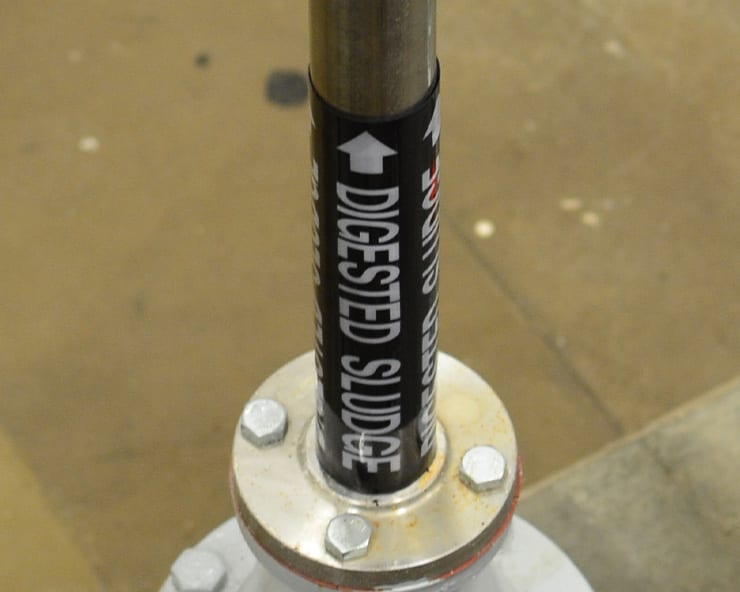